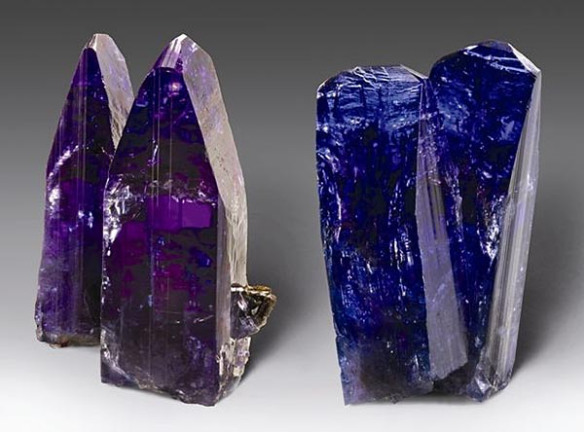 Found in Only One Location on Earth, Tanzanite Celebrates Its 50th Anniversary

It was exactly 50 years ago when a prospector named Manuel d’Souza got his first look at a cluster of intense blue crystals that had been discovered by a Maasai tribesman in the foothills of Mount Kilimanjaro in Tanzania.

At first glance, the crystals appeared to be sapphires. But a hardness test quickly ruled that out.

According to one published account, the somewhat perplexed prospector checked the characteristics of his samples against a resource guide and narrowed down the possibilities. Might they be olivine, or dumortierite, or cordierite or zoisite? The prospector took his best guess and registered an “olivine” claim with the Tanzanian government in the summer of 1967.

Later, the Gemological Institute of America revealed that the stones were, in fact, a never-before-seen variation of zoisite. To this day, a 2km by 4km area in Tanzania is the only place on the earth where this type of zoisite can be found.

The gorgeous blue mineral quickly caught the attention of Tiffany & Co., which wanted to feature the gemstone in a broad-based advertising campaign. The only problem was that the name “zoisite” sounded very much like “suicide,” and that wouldn’t do. So, the marketing team at Tiffany decided to promote the gems as “tanzanite,” a name that would honor its country of origin.

The most valuable tanzanite gemstones display a deep sapphire blue color with highlights of intense violet. The Smithsonian’s website explains that tanzanite exhibits the optical phenomenon of pleochroism, appearing intense blue, violet or red, depending on the direction through which the crystal is viewed.

Tanzanite rates a 6.5 to 7 on the Mohs hardness scale. By comparison, diamond rates a 10 and sapphire rates a 9.

A Maasai folktale recounts how tanzanite came to be. Once upon a time, the story goes, lightning struck the foothills of Mount Kilimanjaro, scorching the land. In the aftermath, a spectacular blue crystal was left shimmering in the ashes.

Tanzanite continues to shimmer in jewelry stores around the world as it celebrates its 50th anniversary.

Don’t Miss This: The Sun Will Morph Into a Diamond Ring on August 21

Next post
Don’t Miss This: The Sun Will Morph Into a Diamond Ring on August 21