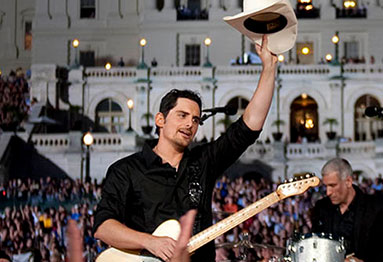 Music Friday: Love-Struck Brad Paisley Forgets the Engagement Ring in ‘You Have That Effect On Me’

Welcome to Music Friday when we bring you fun songs with jewelry, gemstones or precious metals in the title or lyrics. Today, a love-struck Brad Paisley is about to propose to his girlfriend, but accidentally leaves the engagement ring at home in 2001’s “You Have That Effect On Me.” 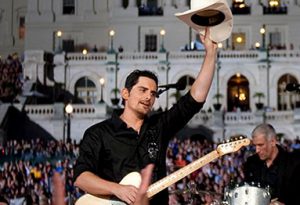 In the song, Paisley assumes the role of a young man who is so head-over-heels in love that he can hardly think straight. He tells his girlfriend how anxious he’s been during the past few weeks — that he’s been haunted by the vision of getting down on one knee and forgetting what to say. Each morning, while brushing his teeth, he’s rehearsed the lines, but still can’t get them memorized.

He purchased the ring of her dreams, but when it was finally time to pop the question, something was still not right…

Paisley sings, “You’ve had your eyes on a 2-carat ring / I finally went out and I bought it / Right now it’s at home sittin’ on my TV / Would you believe I forgot it.”

Our hero tells us why he deserves a free pass for his absentmindedness: “You can’t blame me ’cause it’s plain to see that you have that effect on me.”

The role of an awkward suitor comes naturally to Paisley, who famously fell in love with actress Kimberly Williams in 1991, but didn’t get the courage to call her until 10 years later. Williams starred in 1991’s Father of the Bride, and Paisley developed an instant crush when he saw her on the big screen. His feelings only grew stronger when he saw her in Father of the Bride II in 1995. It took another six years before he would finally contact the actress and convince her to go out on a date.

Williams told QPolitical.com that they “fell for each other fast.” They met in 2001, were engaged in August of 2002 and tied the knot in March of 2003.

Born in West Virginia, Bradley Douglas “Brad” Paisley was introduced to country music by his grandfather, Warren Jarvis, who gave the eight-year-old his first guitar, a Sears Danelectro Silvertone. Jarvis taught his grandson to play, and by the age of 10 Paisley was already performing at his church.

While in junior high, Paisley was doing a show at a local Rotary Club, when he was discovered by a program director for a Wheeling, W.V., radio station. He was invited to be a guest on the popular radio show “Wheeling Jamboree” and the rest is history.

In 2010, Paisley performed at the National Memorial Day Concert on the West Lawn of the U.S. Capitol in Washington, D.C. (see photo, above).

Please check out the audio track of Paisley performing “You Have That Effect on Me.” The lyrics are below if you’d like to sing along…

But leave it to me to come all this way
Get down on one knee and forget what to say
I’m at a loss, should have known this is how it would be
‘Cause you have that effect on me

I must admit I still don’t understand
Why I lose my head holding your hand
There’s no explanation, no simple excuse
For this intoxication I feel around you

Share:
Traveler’s Despair Turns to Elation as Albany TSA Pulls Out All the Stops to Find Lost Diamond