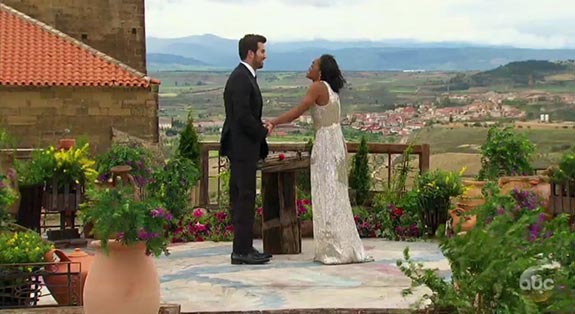 A full season of suspenseful rose ceremonies culminated Monday night in “Bachelorette” Rachel Lindsay accepting a marriage proposal from Bryan Abasolo, along with a stunning 3-carat pear-shaped diamond engagement ring estimated to be worth more than $100,000.

Delicate and elegant, the platinum ring features an impressive center stone surrounded by a halo of smaller round diamonds. Diamond accents also go three-quarters around the band.

Designer Neil Lane told People magazine that although Abasolo was initially drawn to a more elaborate ring with a princess-cut center stone, he eventually went with the more feminine pear-shaped design. Lindsay had apparently told her suitor how much she loved pear-shaped diamonds, so Abasolo “lit up” when he saw Lane’s design.

More than 7.5 million fans tuned in to ABC Monday night for the The Bachelorette Season 13 finale, during which Lindsay had to pick the winner from among the three finalists — Abasolo, Eric Bigger and Peter Kraus. In the end, the 32-year-old attorney from Dallas went with the 37-year-old chiropractor from Miami.

Abasolo went down on bended knee and asked Lindsay to be his bride: “I am the best version of myself when I’m with you. You are so easy and effortless to love. And I just want to love you for the rest of my life.”

Lindsay responded, “I just wanna tell you that I love you and I’m in love with you and I can’t imagine spending my life with anyone else.”

In the lead-up to Monday’s show, which was pre-recorded, Lindsay had been been sporting a temporary gold band on her ring finger so the style of the actual engagement ring would remain a mystery until the show aired.

Lane revealed that he typically presents the finalists with six rings. A few are the same designs offered during previous seasons, others are re-designed and some are brand new.

Before taking center stage as the Season 13 Bachelorette, Lindsay had been a fan favorite during the 21st season of The Bachelor, starring Nick Viall.

Earlier this week, the couple appeared on Entertainment Tonight, where Lindsay compared her ring with that of ET‘s Lauren Zima. They also received a warm welcome from the studio audience of Live with Kelly and Ryan.

Share:
Don’t Miss This: The Sun Will Morph Into a Diamond Ring on August 21

Don’t Miss This: The Sun Will Morph Into a Diamond Ring on August 21

Music Friday: LoCash Pops the Question By Putting a ‘Ring on Every Finger’

Next post
Music Friday: LoCash Pops the Question By Putting a ‘Ring on Every Finger’