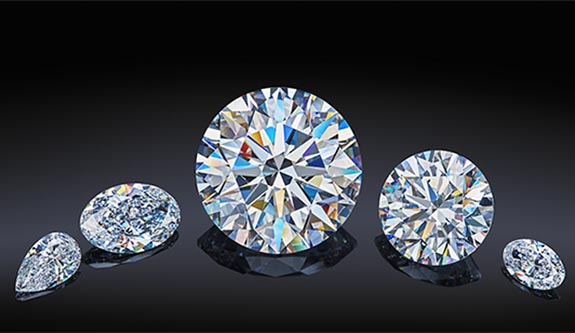 Russian mining giant Alrosa trumpeted its big-diamond cutting prowess with the unveiling of The Dynasty, a 51.38-carat round brilliant-cut sparkler.

The 57-facet, D-color, VVS1 gem is the largest of five polished diamonds all culled from The Romanovs, a 179-carat rough stone recovered from the Nyurbinskaya kimberlite pipe in the Russian Republic of Sakha (Yakutia) in 2015. The cutting and polishing process took 18 months. All five stones will be offered for sale during an online auction in November.

The polished diamond collection, which is also called The Dynasty, represents a new initiative for the mining company, which produces more diamonds (in carats) than any other mining company in the world. Alrosa’s cutting division is stepping up its game in the arena of extra-large and colored diamonds.

“The creation of The Dynasty was of great importance,” noted Pavel Vinikhin, Director of Diamonds for Alrosa. “This stone gives a start to a new stage in the development of Alrosa’s cutting division. The Dynasty demonstrated that we can do it at the highest level. We work a lot on the technique, combining modern technologies with the secrets of jewelers of the Russian Imperial Court.”

Alrosa named the collection The Dynasty to revive the traditions and memory of renowned Russian jewelers, who were famous for their craftsmanship and filigree. Russia’s first cutting and polishing factory was founded by Peter the Great early in the 18th century.

Other diamonds in the collection are named after the dynasties that played a crucial role in the development of Russian jewelry. A 16.67-carat round brilliant-cut diamond, the second by weight, was named The Sheremetevs. The Orlovs is a 5.05-carat oval diamond. The Vorontsovs is a 1.73-carat pear-shaped diamond and The Yusupovs is a 1.39-carat oval diamond.

Share:
Spinel — the New August Birthstone — Has Been Fooling Royalty for Centuries

Spinel — the New August Birthstone — Has Been Fooling Royalty for Centuries

Music Friday: Emmylou Harris Would ‘Proudly Wear Your Wedding Ring’ If She Could Only Win Your Love

Next post
Music Friday: Emmylou Harris Would ‘Proudly Wear Your Wedding Ring’ If She Could Only Win Your Love