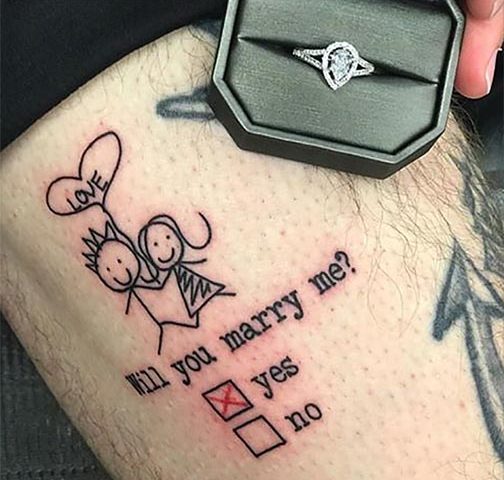 A Denver tattoo artist tricked his girlfriend into applying her first-ever tattoo — on him — and during the nerve-racking process revealed a hidden tattoo that doubled as a surprise marriage proposal. The video starring Vinny Capaldo-Smith and now-fiancée Brooke Wodark has gone viral on Facebook with more than 12 million views. 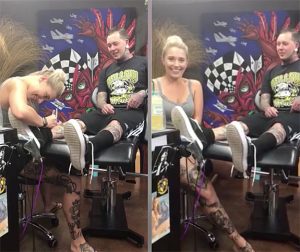 Wodark, 23, told ABC News that Capaldo-Smith, 30, had convinced her to tattoo a small heart on his ankle. Because she had never applied a tattoo before she felt very anxious because “you’re about to put a needle in somebody.”

But while Wordark was nervously working on the heart, Capaldo-Smith slid his shorts up a bit to reveal a secret tattoo he had gotten on his thigh the day before. The tattoo of a boy and a girl holding a “Love” balloon mimicked an illustration Wodark had drawn months before.

“It was an idea from elementary school from when you pass somebody a note to check off the boxes,” Capaldo-Smith told ABC News. “She drew it one night at dinner on a paper tablecloth, and I took a picture of it that night.”

Added to the stick-figure illustration was the question, “Will you marry me?” along with two check boxes, one for “Yes” and the other for “No.”

“In my mind I was just scared to tattoo in general,” Wodark told ABC News. “He told me I was going to tattoo a heart on his ankle and I was freaking out. When he whipped out the ring I just started crying. I looked at it for a second and I was like, ‘No way. Are you kidding? That’s not a real tattoo.’”

Wodark composed herself and tattooed a red “X” in the “Yes” box.

Capaldo-Smith presented Wodark with a pear-shaped diamond engagement ring. The center stone is surrounded by a diamond halo and the split-shank band is adorned with diamonds.

Wodark said the proposal caught her totally by surprise.

“I had no idea it was going to happen that day,” she said. “I was just over-the-top ecstatic. It was everything I ever wanted and more.”

“My boyfriend Vinny had always told me he wanted me to tattoo him. I was going in to get a small tattoo done and he told me that it was the day I was finally going to tattoo him instead. I drew out a small heart on his ankle only to be surprised with a proposal, a beautiful ring, and my future husband!!”

The couple is planning a fall 2018 wedding.

Check out the viral video below…

Share:
Music Friday: ‘You Were a Shining Pearl in a Broken Shell,’ Sings Thomas Dolby in 1992’s ‘Cruel’

Music Friday: ‘You Were a Shining Pearl in a Broken Shell,’ Sings Thomas Dolby in 1992’s ‘Cruel’